In past blogs I wrote about the unique significance of the animal/human bond and how having a pet is good for your health.  Pets not only provide constant emotional and mental support, but they also can be a great way to get in better physical shape. By playing with your pet and going for a walk or a run with your pet, you can provide yourself with a lot of quality physical fitness. There are many studies showing better vital signs and cardiac function in pet owners, as well as less anxiety and depression.  If you can take care of a pet, I highly recommend getting one, because often you’ll discover that your pet takes care of you.  Adopting an older dog or cat is just as rewarding as adopting a younger one, so always keep that in mind. Plus, if we choose to be observant, our pets will passively teach us how to be better people and live better lives.  That said, today I want to write about Cody, Cookie and a special rescue dog, Jack the boxer, since I recently took him on his very last walk.

My dad is a veterinarian in the quaint town of Trucksville, Pa and runs and operates the Trucksville Dog and Cat Hospital. Over the past several years,it’s become a hospital tradition to adopt an older dog- one that might not otherwise be adopted and usually one that involves rescuing – to serve as the hospital mascot.  The current dog usually stays in the hospital office where it rests comfortably on a fluffy bed, all the while showing affection toward the staff and greeting clients and dogs as they enter the adjacent waiting room. Sometimes, when their curiosity peaks, they venture into the exam room to study the furry companions my dad examines.And of course they enjoy being spoiled by the staff, which includes frequent treats, butt scratches, ear scratches, and the long walks that all dogs enjoy.

So far, all of the dogs have been gentle with amazing dispositions.  There was Cody, the partially paralyzed yet exceedingly jolly lab with only 3 functioning legs.  Before coming to the hospital, Cody lived in a shack in the woods with a homeless man. The homeless man was forced to leave the shack and was placed in group housing that wouldn’t allow Cody. He was terribly worried about Cody finding a good home, but luckily Cody ended up at my dad’s. Despite everything Cody had been through, there wasn’t a time he wouldn’t greet you with a vigorous tail wag. If humans could learn anything from Cody, it is that it is possible to be genuinely happy despite life’s obstacles and our handicaps.  Cody didn’t let anyone or anything steal his sunshine, and neither should we. 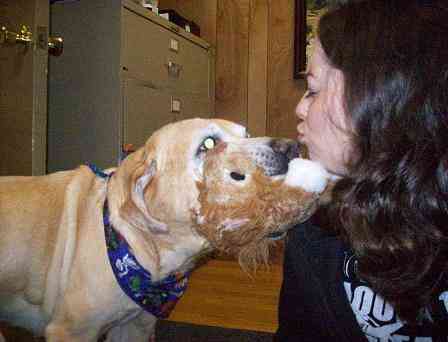 ( A picture of me getting kisses from Cody.)

After Cody passed away due to a heart problem,  there was Cookie, the 9 year old Rottweiler mix, and a dog blessed with an angelic temperament.  I used to love taking Cookie for walks and to the pet store where she would pick out her own food, but my favorite memory of Cookie is when she adopted a scraggly, frail, motherless, abandoned kitten, Dot, who had an injured front leg.  The difference in their physical stature was amusing, yet her maternal instinct was beyond heartwarming. There was no doubt Dot was her baby. Cookie taught me that if a big, old dog can show compassion toward a sick, crippled kitten, human beings should surely be showing a lot more compassion toward each other.   Two years ago, Cookie passed away in my parents’ living room, surrounded by everyone who loved her.  I still miss her. 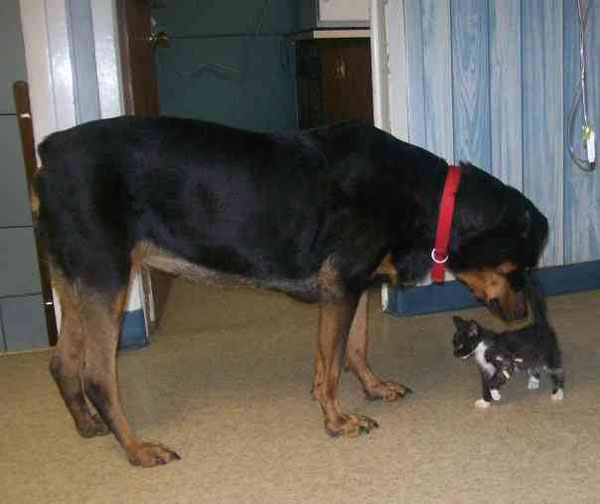 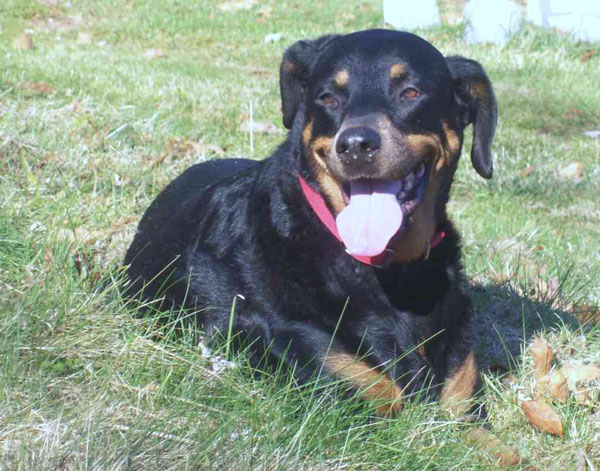 Then in early March of this year, Jack the Boxer showed up at my dad’s animal practice.  Jack was a pure bred, white boxer. When he arrived he was skin and bones. Each visible rib was a stark and morbid indication that he was starving. Not only was he a starvation case, but he had a huge seven pound tumor hanging down from his abdomen. It was so huge that it dragged against the surface, so much so, that Jack could barely walk.

My dad surgically removed the tumor, which he later identified as a mast cell tumor.  A mast cell is a type of cell that mediates an inflammatory response in the body. During his long healing process, Jack was fed regularly so his weight and strength would steadily increase.  I remember watching how fast he ate some of his early meals. He was like a vacuum on speed.  Below is an early picture of how he looked when he first arrived at the animal hospital. It was taken after his tumor was removed. The first photo has my dad in it, too.  🙂 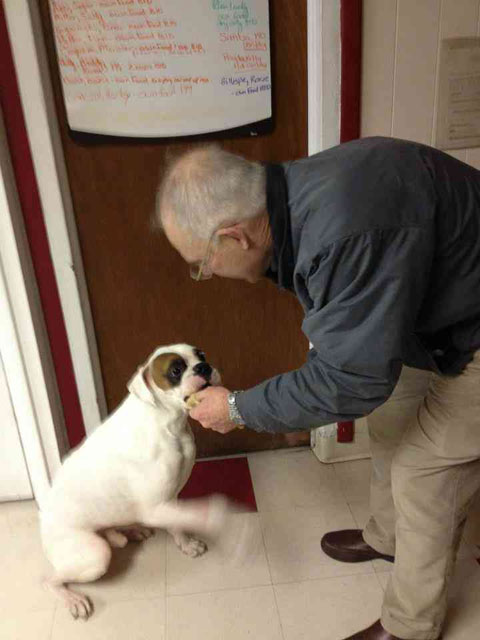 Below is a picture of Jack right after his abdominal tumor was removed. 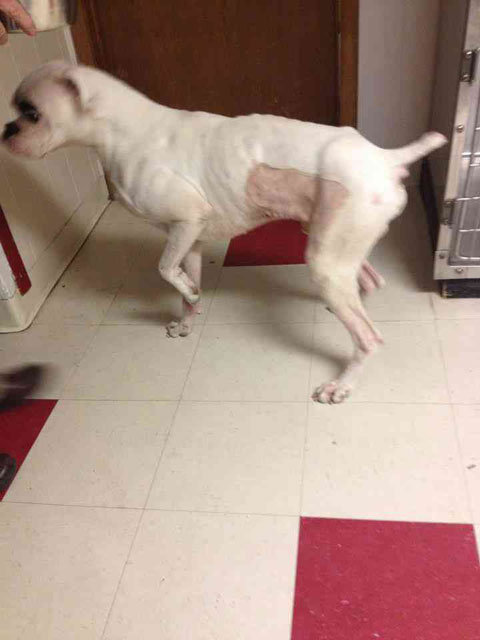 As Jack became stronger and more comfortable at the animal hospital, his true personality started to show.  And he was absolutely lovable- so lovable that it was impossible to deny him the reign as the hospital’s next mascot.    Jack enthusiastically showered everyone he encountered with licks and, after his excitement settled down, he would often rest his head in someone’s lap, as if he was sleeping while standing up.  He was curious about all the dogs and cats that came to the hospital for various checkups and often tried to make friends with them. Sometimes it worked out and other times -not so much. 😉

He took to my dad the most and my dad would take him for short walks during his lunch breaks and longer ones on the weekends. One of Jack’s favorite spots was the Back Mountain Trail- a local outdoorsy hit in rural Pennsylvania. I remember one time having Jack for a walk on the Back Mountain trail and spotting a snake.  I think it was an Eastern Hog-nose snake.  I was a bit nervous, having visions of Jack locking the snake between his jaws and then having to macgyver  a snake from a dog’s mouth. My nightmare was avoided however, as gentle Jack seemed more interested in making friends with the snake. The snake, being more on the antisocial side, slithered away to hide in the adjacent weeds.

( A picture of my dad and Jack on the Back Mountain Trail:) 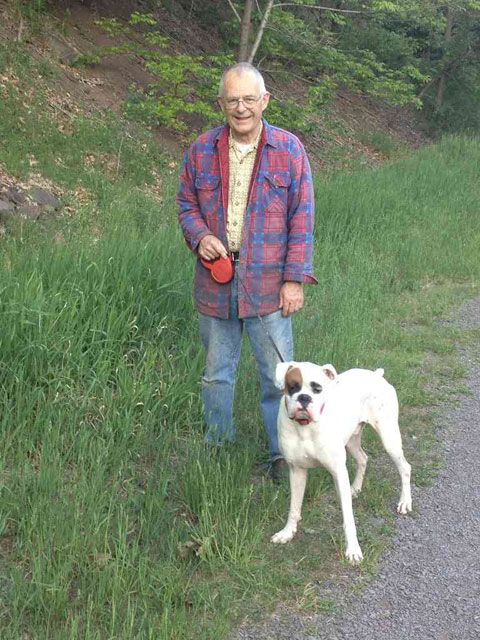 Jack gained weight, looked a million times healthier and seemed like he was really enjoying his new life with his new family.  I live in New York City, but I always looked forward to going to Pennsylvania to see him and take him on a walk.  About 5 weeks ago,  I did just that. I took the bus home from New York City on a warm, pleasant Thursday, and that night my Dad and I took Jack for a big walk through Frances Slocum State Park.

This was an unusual walk because Jack had so much energy. When we parked the car, the first thing that Jack did was jump out of the backseat, onto the grass, and sprint five times in a circle.  Then he plopped on his backside and rolled back and forth on the greenery for a good minute.  “My! someone is sure happy to be here!” I thought.

We walked by the frog pond in which a few turtles were lazily floating on lily pads and along the quiet river spotted with a few patient fishermen in their row boats. There was a light breeze as the sun took its time setting, as if resistant to turn the gorgeous day into night.  Jack took it all in as he trotted along with me and my dad. Sometimes he’d get distracted by a sound or a smell and pounce in the grass along the road, and I’d always wonder what caught his attention. The entire experience is one you could classify as a dog’s dream- Jack’s dream.  He soaked it all up. As if to get a last final kick before we walked back to our car, Jack jumped up high and gracefully hurdled over an old wooden fence.  As I struggled over it, getting my shirt caught on a stray piece of wood, I commented on Jack’s surprise display of athletic ability.

The next day, I stopped by the animal hospital to take Jack on another walk. When I walked in the front office to grab him, I knew something was wrong. I greeted Jack, but he didn’t lift his head up. He was laying on his side in his bed and looked lethargic and weak.  This was not Jack’s normally enthusiastic greeting. Of course I let my dad know, and my dad first thought that Jack might have been tired out from the long walk we took. My dad took Jack’s blood anyhow, just to make sure his values were okay. His pancreatic enzymes were elevated, but that was it. We all thought the elevation in enzymes were related to new treats Jack had been eating.  No one ever suspected the worse.

Over the next day and a half, Jack’s condition deteriorated rapidly.  He started walking in circles, his eyes looked dilated and fixed, he refused to eat and his lethargy got worse and worse. Everyone knew something more needed to be done. One of my dad’s employees graciously offered to drive Jack to Cornell Veterinary Hospital, since its known to have a topnotch neurology department.

Later in the day, Cornell called with very sad news. After doing an MRI, they told us Jack had a brain tumor. Everyone’s heart sunk. It was just shocking. I was especially stunned after having witnessed him on our walk only 2 days later.  Could this really be the same dog?!!? My dad had told me boxers are prone to brain tumors, but still, the sudden clinical presentation just knocked everyone off of their feet.   Not Jack, the young dog who only recently received a remarkable second chance at life and seemed to be doing so well. Ugh. It was one of those sudden, dreaded, unfair phone calls that reminds you that you just don’t know- you just don’t know when a phone call like that is going to change the course of your day, year or life, and no one alive is free from receiving such a phone call.

Jack never woke up from his MRI procedure. He peacefully died, was cremated, and his ashes will undoubtedly join those of  our other fallen, beloved animal companions on my parents’ fireplace.  I once read a quote that the only fault dogs have is that their lives are too short. I couldn’t agree more.

Though I was sad to say goodbye to Jack, I am so happy I took him on that walk.  Perhaps he sensed it was his last walk, and like a creature always willing to bow to whatever life throws at him, he accepted his fate gracefully by making sure he thoroughly enjoyed his final moments on earth.  Perhaps he had no idea and I’m anthropomorphizing. Still, I’ll always remember him and his last walk. And even though he only graced my life for a very short while, Jack taught me an important lesson: Never waste a day, and always live like that day might be the very last. One day it will be.

Unfortunately I no longer have my photos of Jack on his last walk, because I took them with a phone that, soon after, died by drowning.  (In truth, I accidentally spilled water on the darn thing.)   I tried to retrieve the photos, but I had no luck. At least, until dementia sets in, I have Jack’s images stored in my memory.  Instead of the photos that I wish I had, I’ll post one of my favorite photos of me and Jack below.

4 Responses to “Pet Therapy: What Our Furry Friends Can Teach Us and Do for Our Health, and a Tribute to Cody, Cookie and Jack.”